California is the number two rodeo state in the nation, second only to Texas. We host about 60 professional rodeos annually. Of these, most are sanctioned by the Professional Rodeo Cowboys Association (PRCA), the largest such organization in the country. There are likely double that number of amateur events, plus scores of the Mexican-style rodeos called “charreadas.”

It seems only fitting, then, that California should also boast the very best and most progressive rodeo animal welfare law in the country, Penal Code 596.7. The legislation, SB 1462, was introduced by Senator Don Perata (D-Oakland) in 1999 and signed into law by Governor Pete Wilson. The law was amended in 2007 (AB 1462, co-authored by Assemblymembers Audra Strickland, R-Thousand Oaks, and Joe Coto, D-San Jose) so as to include the Mexican charreadas, and signed into law by Governor Arnold Schwarzenegger. Both bills were sponsored by ACTION FOR ANIMALS, and enjoyed major bi-partisan support, for which I will be forever grateful.

Good as Penal Code 596.7 is, it still needs strengthening. As currently written, the law allows for either an on-site veterinarian OR  an on-call vet able to arrive within one hour. The rodeo promoters usually opt for the on-call vet, simply because it’s cheaper. You can bet they would never allow a cowboy with a broken back to wait an hour for a medic or an ambulance. The general public mistakenly assumes that veterinarians are always present at rodeos. And why wouldn’t they? On-site vets are required at horses races, horse shows, endurance rides, etc. It seems only fair that there should be immediate medical attention on hand to alleviate animal suffering. Having a veterinarian on-site should simply be part of the cost of doing business, no?

Current rodeo law requires that animal injury reports be submitted to the State Veterinary Medical Board within 48 hours of the end of the rodeo. In the law’s 12 years, fewer than 20 reports have been received by the Board. NOT POSSIBLE! With some 150 annual rodeos, both professional and amateur, plus the charreadas, there should be a minimum of 40-50 injury reports submitted every year. Recent PRCA injury surveys document an animal injury or death at more than 50% of their events. It’s clear that the on-call vets are not being summoned, and the animals are suffering accordingly.

PROPOSED AMENDMENTS TO FIX THE PROBLEM:

(1) Amend 596.7 so as to require either an on-site licensed veterinarian at all rodeos and charreadas, ORan on-site Registered Veterinary Technician (RVT), with a licensed veterinarian on call. There are about 5,500 RVTs in California, who would be far less expensive to hire than a licensed veterinarian. And the RVTs would be more likely to summon an on-call vet when needed than would the promoters or contractors. The PRCA has required on-site veterinarians at all its events since 1995, when five animals were killed at the California Rodeo at Salinas. Rodeos always have on-site ambulances and paramedics to treat injured cowboys and cowgirls, and rightly so. Surely the animals deserve equal consideration. Where’s the cowboys’ touted sense of fairness, pray?

(2) Two weeks advance notice to local animal control agencies so that they might deploy their staff to see that the rules and laws are followed. Traveling circuses with animal acts are already required to give such notice. Again, it’s a matter of FAIRNESS.

And this: I have been trying for 20 years to get a statewide ban on the brutal “steer tailing” event, one of the charreada’s nine standard events (already banned in Alameda and Contra Costa counties). Tails may be broken, even ripped off, and horses may suffer broken legs when the steers run the wrong way. The president of one charreada association recently informed me that his organization had voted to add American-style calf roping to their programs, if the steer tailing event is ever banned. Should this come to pass, there would be an even greater need for on-site veterinarians and RVTs at all these events. (NOTE: Several years ago, in an disingenuous attempt to defray the growing public criticism of the cruel calf roping event, the PRCA renamed the event “tie down roping.”)

Hopefully, some kind-hearted legislator will introduce a bill in the 2012 session to give these animals the minimum medical care they deserve. 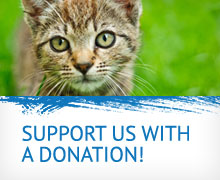